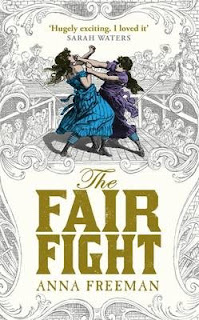 Huge thanks to Diarmaid McCaffrey for his insightful review of Anna Freeman's historical fiction title, The Fair Fight...

Perhaps, more than any other genre of book novel based around historical settings is probably one of the most grueling types of fiction books any author worth can write with an audience that’s notoriously unforgiving when it comes to anything that might take them out of the novel. Inconsistencies are the death knell for any immersive experience and that’s goes double for a novel that attempts to zero in on a certain pocket of history not to mention several different  seemingly small factors having the potential to anchor and take the reader out of the book entirely. Tone, the use of past tense, relevant terminology and language fitting the time period, are all spinning plates that could topple over at any moment  if not handled well.

So if nothing else, The Fair Fight deserves to be singled out for the clear amount of research and attention to detail woven in the narration.

Set in the later half of the  1700s, the narration of the book is divided between the three main characters of the novel  Ruth, daughter of a prostitute, whose slowly making a name for herself as a female boxer. Charlotte, Ruth's backer and supporter, who finds her own motivation from Ruth to walk her own path, and finally George, best friend to Charlotte's husband and thus creating quite a sizeable awkward dynamic  with these three characters. Of course, the use of multiple narrators potentially creates the risk of all the voices becoming  bland and indistinguishable but thankfully each  voice of each character is distinct and  unique to each one’s personality

...And therein lies the heart of The Fair Fight;  how the characters interact and mingle with each other, their personalities the driving force of the novel, each one having their own distinct personalities and opinions behind them, underlining the class system that separates the two friends and the general divide their individual worlds have

Freeman's skill is clear with each page , however, as both are drawn with such depth that one has no trouble believing in their motivations, The action sequences, most of which take place during boxing matches, are rich with detail, but are far from the focus. They’re more like  devices used to segway towards each new section of the book.

Over all, The Fair Fight is a well packed hyper authentic look through a certain period of history. That’s sure to make any plane ride or train journey fly by, and anyone that’s a fan of historical fiction, warts and all will certainly enjoy this hidden gem. The story itself is certainly outside of the norm that you’re used to seeing from the genre, and thanks to that it has a quirky little charm that breaths life into its characters.

The Fair Fight is published by W&N and is available in PB and ebook format. You can order your copy, with Free Worldwide Postage, HERE. The ebook can be ordered via amazon link below: