The Treatment by C.L. Taylor. Review from Mia Madden, aged 13. 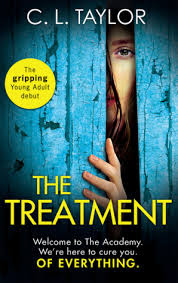 This is the stunning YA debut from C.L. Taylor. It is about sixteen-year-old Drew Finch, who's brother, Mason, has been sent to a reforming school.  One day, Drew meets Dr. Cobey, a person who has been working at the school. Cobey gives Drew a letter from Mason saying that the school has been brainwashing teenagers. She dismisses it at first, thinking that her younger brother is just pranking her, but then she starts to grow worried. What if her brother is being serious? What if Norton House actually was brainwashing teenagers?

She does a little bit of research and finds nothing, except for a single person claiming to know the truth about Norton House. Drew meets up with this person, who calls themself Zed Green. Zed brings her boyfriend, who was a victim of Norton House's 'treatment'. The boy, that was once a rebellious skater-kid, was now a mindless, polite, contributor to society. Drew decides to take action. She has to find a way to be sent off to Norton House to rescue Mason, without raising too much suspicion. Will she get to the school to save Mason? And will she be able to avoid the treatment, herself?

I would never be able to do this book justice. I absolutely adored it. It's probably the best book I've read this year and I would be surprised if it doesn't win some form of award. C.L. Taylor is now my favourite (non-Irish) YA author. I just couldn't see the end coming! I love Drew's character, probably because she reminded me of myself. At one stage, she claims she was Emo. I'm sort of an Emo now. I mean if she listens to Evanescence, Fall Out Boy, Paramore and other bands that I like, she's basically an older, British, fictional version of me! Anyway, I would definitely recommend this book for ages 11+.

The Treatment is published by HQ Young Adult on 19th Oct 2017, in PB and ebook format. You can pre-order your copy via amazon link below:


**We received a copy of this title, from the publishers, in return for an honest review...