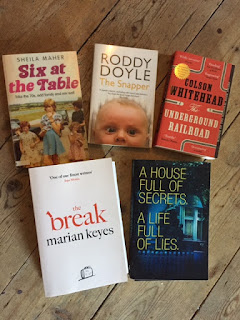 It is time for my September #LateLunchBookclub choices. It can be hard to please all readers, so I have chosen from different genres in the hope of finding you a perfect read. All these books are available from your local bookstore, library or online. (Remember, if you can't find a book in-store, your bookseller can order it in for you.)


I really hope you enjoy the recommendations and feel free to leave me a comment on the blog, twitter: @margaretbmadden or facebook: Bleach House Library. Follow #LateLunchBookclub for all LMFM book reviews, interviews and chances to win some book bundles.  #LateLunchBookclub Podcasts are also available on the LMFM website. So, here we go...

BOOK OF THE MONTH: The Underground Railroad by Colson Whitehead

Cora is a slave on a cotton plantation in Georgia. All the slaves lead a hellish existence, but Cora has it worse than most; she is an outcast even among her fellow Africans and she is approaching womanhood, where it is clear even greater pain awaits. When Caesar, a slave recently arrived from Virginia, tells her about the Underground Railroad, they take the perilous decision to escape to the North.

In Whitehead's razor-sharp imagining of the antebellum South, the Underground Railroad has assumed a physical form: a dilapidated box car pulled along subterranean tracks by a steam locomotive, picking up fugitives wherever it can. Cora and Caesar's first stop is South Carolina, in a city that initially seems like a haven. But its placid surface masks an infernal scheme designed for its unknowing black inhabitants. And even worse: Ridgeway, the relentless slave catcher sent to find Cora, is close on their heels. Forced to flee again, Cora embarks on a harrowing flight, state by state, seeking true freedom.


At each stop on her journey, Cora encounters a different world. As Whitehead brilliantly recreates the unique terrors for black people in the pre-Civil War era, his narrative seamlessly weaves the saga of America, from the brutal importation of Africans to the unfulfilled promises of the present day. The Underground Railroad is at once the story of one woman's ferocious will to escape the horrors of bondage and a shatteringly powerful meditation on history.

Amy's husband Hugh has run away to 'find himself'. But will he ever come back?
'Myself and Hugh . . . We're taking a break.'


'A city-with-fancy-food sort of break?'


If only.
Amy's husband Hugh says he isn't leaving her.
He still loves her, he's just taking a break - from their marriage, their children and, most of all, from their life together. Six months to lose himself in South East Asia. And there is nothing Amy can say or do about it.
Yes, it's a mid-life crisis, but let's be clear: a break isn't a break up - yet . . .
However, for Amy it's enough to send her - along with her extended family of gossips, misfits and troublemakers - teetering over the edge.
For a lot can happen in six-months. When Hugh returns, if he returns, will he be the same man she married? Will Amy be the same woman?
Because if Hugh is on a break from their marriage, then so is she . . .
The Break is a story about the choices we make and how those choices help to make us. It is Marian Keyes at her funniest, wisest and brilliant best.

A murder without a body


Eighteen-year-old Chloe Emery returns to her West London home one day to find the house covered in blood and Kate, her mother, gone. All the signs point to murder.


A girl too scared to talk


Maeve Kerrigan is determined to prove she’s up to her new role as detective sergeant. She suspects Chloe is hiding something, but getting her to open up is impossible.


A detective with everything to prove


No one on the street is above suspicion. All Maeve needs is one person to talk, but that’s not going to happen. Because even in a case of murder, some secrets are too terrible to share…

Non-Fiction: Six at the Table by Sheila Maher 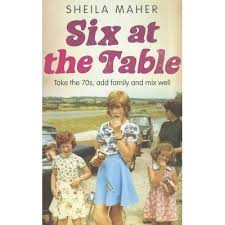 In Six at the Table, regular contributor to RTÉ Sunday Miscellany Sheila Maher tells the story of her childhood through meals shared around the kitchen table – and occasionally from the boot of the car on long family trips – and celebrates the central role that the food lovingly prepared by her mother played in her younger years.
Exotic Lilt and exploding Moondust have their thrills, but it is her mother’s Sunday roasts, steak and kidney pies and home-made Jaffa cakes that create the regular and comforting rhythm of Sheila’s life and of the rest of her boisterous family.
From sliced egg and cold ham salad on summer days to the milk puddings that mark the passage of the winter weeks, packets of Tayto, Campbell meatballs and the fascination with Sodastream, Six at the Table is a nostalgic journey through an Irish childhood in the 1970s, when uniforms were itchy, porridge stuck to your ribs, and Cidona felt like the height of sophistication.

Twenty-year-old Sharon Rabbitte is pregnant. She's also unmarried, living at home, working in a supermarket, and keeping the father's identity a secret. Her own father, Jimmy Sr., is shocked by the news. Her mother says very little. Her friends and neighbours all want to know whose "snapper" Sharon is carrying.
In his sparkling second novel, Roddy Doyle observes the progression of Sharon's pregnancy and its impact on the Rabbitte family--especially on Jimmy Sr.--with wit, candor, and surprising authenticity.

Here's hoping you find something here that appeals to you, and that you will listen in to the show at 2pm today. The link to the #LateLunchBookclub will be available here, after the show. On behalf of myself and Gerry, we hope you enjoy your September reads and we would love to hear your thoughts via twitter, facebook or the blog... 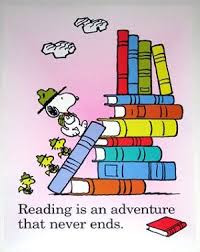