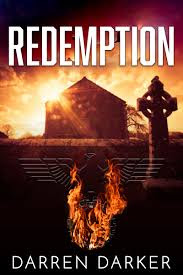 Darren Darker’s Redemption bears all the hallmarks of a modern thriller. A crotchety broken-hearted action hero archetype; vendettas and old grudges; decades old regret and demons from the past that have to be slain. But Redemption twists these conventions into a genuinely original narrative.

At the tail end of the second World War Karl Muller, a German bomber, crash-lands off the coast of Ireland. Reading the writing on the wall he abandons his plane, leaves behind his partner and starts a new life in rural Ireland and, for decades on end, makes the best of his clean slate. However, when the past comes back to threaten his family, he needs to rely on his friend. Recent widower John Morgan is hoping to rebuild his life in the wake of his wife’s death while at the same time trying to save the Miller family.

The narrative switches several times during the book, most notably back to the 1940’s in Muller’s youth, which is a complex plot device to traverse, but Darker switches back and forward between POV’s seamlessly and manages to convey these themes and general plot in a way that’s fast moving and entertaining throughout (which is no easy feat for any author especially when it’s come to a book that deals with historical aspects). It’s a totally immersive experience, with subtle little details throughout, that paints a perfect picture of the Irish countryside.

While it’s an enjoyable read, Redemption doesn’t have that “polished” feel with somewhat lack-luster editing, which leaves many of the sentences without words and in one scene during the later chapters it magically jumps from Summer to November which was a tad jarring.
(**Ed. update: Redemption has since gone under a re-edit and the author is happy with changes.)


Despite this, passion pours from this piece with remarkable detail regarding the historical aspects and exciting characters.

Darren Darker is a member of the Irish Writers Centre and contributor to Writing.ie. He started his own car maintenance business 9 years ago and currently has 5 staff and growing. He has been the recipient of several awards for services to the state as a member of the Civil Defence as both a voluntary fireman and a coxswain on a rescue boat whose duties included helping the Gardai search for bodies. Darren is the proud dad of Adam.


He has been an avid reader since he was introduced to Agatha Christie, Sven Hassell and Ed McBain at an inappropriate age! Redemption is the first novel in his John Morgan Series . The follow up - No end to the lies will be out shortly.


Redemption is available in ebook format. You can get your copy via amazon link below: