Her Kind by Niamh Boyce. Extract and Giveaway. 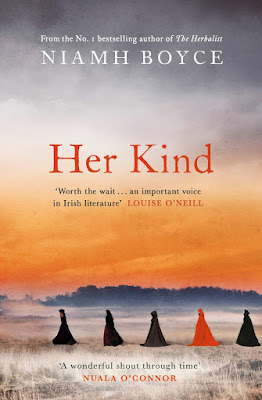 The folks at Penguin Random House Ireland heard a rumour that I was a huge fan of Niamh Boyce and have kindly allowed me to share an excerpt from her latest novel, Her Kind. They have also offered up three copies of the book for three lucky readers. To enter the giveaway, just click on the rafflecopter link at the end of this post. Open INT and ends 10th May. Good luck!
My Review can be heard on the LMFM #LateLunchBookclub podcast (45m13 into clip). If you love historical fiction, then this is for you! 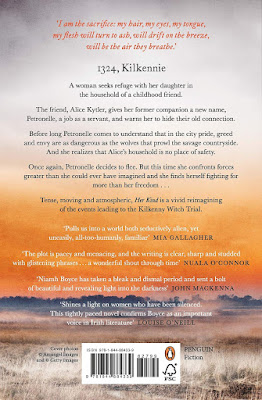 The eagerly awaited new novel from the award-winning author of No 1 bestseller, The Herbalist


1324, Kilkennie
A woman seeks refuge for herself and her daughter in the household of a childhood friend.
The friend, Alice Kytler, gives her former companion a new name, Petronelle, a job as a servant, and warns her to hide their old connection.
Before long Petronelle comes to understand that in the city pride, greed and envy are as dangerous as the wolves that prowl the savage countryside. And she realizes that Alice's household is no place of safety.
Once again, Petronelle decides to flee. But this time she confronts forces greater than she could ever have imagined and she finds herself fighting for more than her freedom ...
Tense, moving and atmospheric, Her Kind is a vivid re-imagining of the events leading up to the Kilkenny Witch Trial.

Excerpt from Her Kind

Kilkennie Castle
All Hallows’, 1324
By first bell, a crowd had gathered beneath the trees. They wore cloaks lined with rabbit or vair, according to their rank. Despite the snow, they waited, watching the castle gates. They argued constantly – of the witches locked inside the Castle Gaol, which would be the first to confess? Which, if any, was innocent?
‘These are serious proceedings, not a play,’ Friar Bede told them. ‘Go home until the cry is raised.’ They went hungry, but they would not go home.
As prime was rung, figures appeared at the top of the hill. The prisoners had left the confines of the gaol, but no one could say afterwards how, or by which door. Had everyone looked away, to the sky, or to their feet, at the same time? The women moved slowly. Heretics’ crosses had been stitched to their chests. Weighed down by their trailing gowns, the ladies were last. The maids, less burdened, led. One was unveiled, her hair straggling past her waist. As they neared, people blessed themselves.
It was a strange sight, the bent figures, dark against the snow, the yellow crosses on their gowns, the bright cold sky above. The crowd muttered their names, as if counting children who had been lost. Helene, Esme, Lady Cristine, her sister, Beatrice . . . but where was the one they had waited for, where was the maid of Dame Alice Kytler?

Her Kind is published by Penguin Random House Ireland and is available in all good bookshops now. 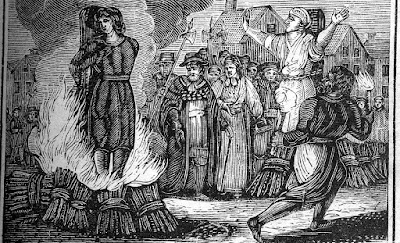 Posted by bleachhouselibrary at 12:24 No comments: