Book Review: The Flight of the Wren by Orla McAlinden

The Flight of the Wren by Orla McAlinden 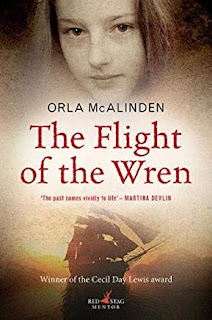 Tasmania, 1919. Sally glimpses her face in the mirror and knows she is dying: “the dusky hue of the crêpey skin . . . so different from the fine pale skin of healthy old age . . . I am drowning slowly, drowning blackly in my own dark fluids.” The Spanish influenza - or Black Death - has hitched a ride with returning soldiers, spreading like wildfire. As the disease takes hold, the memories flood back and seep out into the world she has created in Australasia; a world far away from the Great Hunger of Ireland.
King’s County, 1848. Fourteen-year-old Sally lies on the mound of her parent’s grave. Famine has decimated the country and she has nowhere to go. As she wanders the roads and fields, searching for food, she enters the world of the Curragh Wrens: women who have made lives in the bushes surrounding the army barracks, servicing soldiers in order to survive. This life is extremely harsh and dangerous and Sally sees transportation as the only option. McAlinden delivers historical fiction with a lyrical and haunting touch, bringing these forgotten Irish women back to life.
The Flight of the Wren is published by red Stag Mentor and is available in PB and ebook format.
I was lucky enough to catch up with the author, when she dropped into Bleach House for a chat about The Flight of the Wren.  You can watch our discussion below:
Posted by bleachhouselibrary at 12:25 No comments:

Book Review: Rules of the Road by Ciara Geraghty

Rules of the Road by Ciara Geraghty 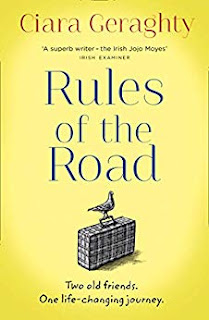 Terry is worried about her best friend, Iris. It’s her 58th birthday and she is missing. Breaking into her friend’s house, Terry finds an envelope addressed to herself and is devastated to learn that her friend intends to end her own life. Iris has progressive MS and has booked into a clinic in Switzerland. Panicking, Terry packs her father – who suffers with dementia – into the car, managing to locate Iris as she is about to board a ferry at Dublin Port. Refusing to let her travel alone, Terry and her father join Iris on her road trip across Europe (not an easy task, with an elderly man who is in a permanent state of confusion, a seriously ill woman who can barely walk and a driver who is afraid of motorways).
Geraghty combines sadness with humour, handling the delicate balance very cleverly. MS and dementia are both addressed in a gentle way, allowing for a lighter read, with the power of friendship and love leading the narrative. A delightful mix of characters and a wonderfully warm read.

Rules of the Road is published by Harper Collins and is available in TPB and ebook format.
Posted by bleachhouselibrary at 12:15 No comments: