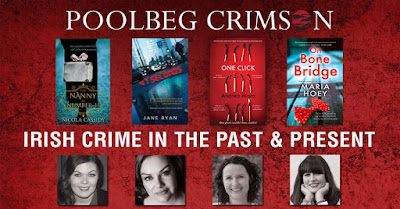 Poolbeg Crimson: Irish Crime Fiction in the Past and Present 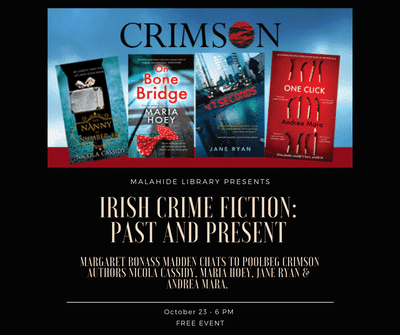 In preparation for this week's Crimson Crime Event, I have a little exclusive for Bleach House Library followers. Each of the featured Crimson Crime authors have shared nuggets of their writing process and what it is like to write Contemporary Crime vs. Historical Crime Fiction. Come along to Malahide Library on Wednesday 23rd October to hear more from Andrea Mara, Nicola Cassidy, Jane Ryan and Maria Hoey. Free event and, having hosted Crimson Crime before, I can guarantee a lot of laughs.

‘Chatting to UK author at a festival last year, she told me she always sets her books in the past, because smart phones have "ruined everything". If  a character gets lost, they can just use Google Maps to find their way home. If they're in trouble, they call the police - they can do that without call credit or PIN codes, and there's only so often readers will believe a phone is out of coverage. GPS makes it easier to track and trace missing characters, and the internet in general makes it very simple to research and find people.


However, you can flip that on its head - for every element of plot that becomes more challenging in the digital age, there's another that becomes more interesting. There's an ever-widening scope of storylines linked to smart phones, social media, and the internet. Characters can spy on one another using apps and in-built cameras. They can record calls and conversations. They can catch each other out by checking fitness tracker routes - wearable fitness devices have even been used in real life cases to break alibis. Characters can set up fake social media accounts or have two on the go at the same time to keep foes (and readers) guessing.

In my book, One Click, the main character, Lauren, does what many Instagram users do – she posts a photo of a crowded beach scene. Only there's a woman in the photo, one who is identifiable to an anonymous troll who begins sending increasingly threatening messages. Lauren has no idea why the sender is so interested in the woman on the beach - she deletes the photo but of course as we all know, you can't ever really delete anything from the internet! ‘

‘While taking part in a walking tour of my home town of Drogheda, Co. Louth, I first heard about the high rates of infanticide – the act of killing newborn babies, in 19th century Ireland. Intrigued by a local story of a baby’s body found in a suitcase, I  began to research the crime and found there were numerous cases of infanticide, where mothers murdered their own babies, recorded. Coroners of the time noted the crime as common. The baby in the suitcase story inspired the opening of The Nanny atNumber 43.
I’ve always been fascinated by the 19th century. Our parents liked to bring us to visit old houses and historic sites, and I think that’s where the interest began. I loved the fashion, the toys, the upstairs, downstairs effect – I’ve been living Downton Abbey in my head since about the age of eight!

“Setting a crime story in late 19th century Ireland was natural for me, as I’m so familiar with the time period. If you think about books like Sherlock Holmes, you can see how detective work as know it nowadays was just beginning. Chemical testing and crime scene photography were introduced. We still remember great crimes from the 19th century, like Jack the Ripper. The Nanny at Number 43, was inspired by 19th century serial killers Mary Ann Cotton, known as The Black Widow, who murdered her husbands and their children for the inheritance and Amelia Dyer, who was a prolific baby killer, thought to have done away with hundreds of small babies.
“My book covers elements of all these crimes. The research was fascinating, although a little macabre. I studied books on various 19th century crimes, learning about police procedures of the time, how autopsies worked, how coroners worked and the effects of various types of poisoning. I wanted to explore what could possibly drive these women to do the things they did.’

‘The question could just as easily be why do I write crime? Like most writers I am a voracious reader and started reading crime (in my case the secret seven, progressing to Agatha Christie at nine) very early on. I was so taken with the upending of reader expectations that perhaps I haven’t outgrown it. I am a fan of plot and intricately developed characters and that is the main reason I write crime, I am fixated with the ‘solving’ of puzzles within stories and crime lends itself to this.

In my opinion the detective novel is the pinnacle of this, you can bring the reader on a journey – I would always differentiate between plot and story – plot being the way the writer presents the story to the reader and story being the journey you are bringing your characters on. One of the reasons I enjoy police procedurals is that you have one central character, in my case Detective Garda Bridget Harney, that can be developed novel by novel. This allows events to have to your character in parallel, like life, rather than sequentially which can feel staged and could keep a character superficial.

Modern police procedurals tend to hang fiction on a skeleton of fact, this is another area of huge interest to me, actual policing work. My main character is based in the Drugs and Organised Crime Bureau in Dublin and AGS are a complex and fascinating organisation – for me at least – I have a passion for research and have delved into policing strategies in many forces, the London Met, AGS, the West Midlands, complete with the myriad of information put out by the EU on drug trafficking and organised crime. In an age of social media, camera phones and the human desire to catalogue our lives working as a police officer has never been so challenging. I try to bake in some of this conflict into the life of my character.’

‘I admit it, the past has an almost irresistible tug on me when it comes to writing my novels. In the case of my debut, The Last Lost Girl, I knew from the outset that it would be set in the heatwave summer of 1976. For my second book, On Bone Bridge, the seminal incident of the book takes place in 1984.  My forthcoming book has its heart in 1996.
To a certain extent, and I admit it, there is a freedom about writing crimes of the past – a freedom from the restraints imposed by technology, mobile phones, social media etc. Crimes were crimes then and detection was a different ballgame.
But mostly, I suspect, it is down to my love of writing child characters and then following them through to adulthood where the shadow of their past sins (whether big or small) finally catch them up.  Because I like to write ‘bad’ children or children who might be perceived as such. The subject of child killers, by which I mean children who kill, has always fascinated me.  I want to know why? I want to know how it gets to that point. I want to know – are they intrinsically bad or were they (and if so, at what point) themselves failed?
But, in all my books, I move between a past setting to a contemporary one. I suppose I find a joy and a challenge in interweaving those timelines and, as it were, seeing my characters through to maturity.  Seeing what life has done to them, if you like. I like to watch them change and develop, I am fascinated to see whether their badness is ingrained or if there is a possibility of redemption.
And ultimately, such is the mystery of writing anyway, it is my characters who lead me and not the other way around, and so far, invariably, they have led me into the shadowy, intriguing, inescapable past.’

Poolbeg Crimson titles are available in all good bookshops and on poolbeg.com
Posted by bleachhouselibrary at 07:28