Blog Tour: Hamilton and Me: An Actor's Journey by Giles Terera

Thanks to @NickHernBooks for adding me to the blog tour for Hamilton and Me: An Actor's Journey.

I received and Advance Reader's Copy of the title in exchange for an honest review. 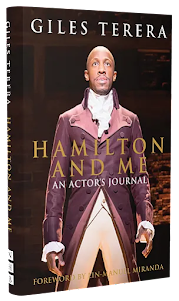 It has been an age since I reviewed a book on this website. I have mostly been reviewing for The Sunday Independent and LMFM radio and between that, and my academic writing, I have been neglecting this book blog. But what a way to return!
I'll be completely honest and admit that I am not at all a fan of musical theatre. There. I said it. But...
I first encountered Hamilton as a second year Undergrad. My lecturer was aware of my dislike of musicals and as she was the complete opposite of me she took pleasure in watching me roll my eyes when we had to cover these texts. Then, I was off sick and decided to watch a snippet of the musical that was taking the world by storm. I had no idea of the story, the songs, the actors. Nothing. Nada. Zero. I was blown away. I had tears in my eyes and secretly couldn't wait to watch the whole thing. I never got a chance. I bought my daughter tickets for the London show (we are living on the East Coast of Ireland) and tried not to be jealous when she boarded the flight without me.
Fast forward to the day I was invited to join this blog tour. I actually managed to remain oblivious to the story (bar what little I knew about The Founding Fathers History) and decided to dive in to Terera's journal with my blinkers on. I love a challenge, me...
Hamilton and Me opens with a wonderful Forward from the show's writer, Lin-Manuel Miranda. He explains how he was actually present for Terera's audition (an unusual thing) and how he was "in awe of his performance." High praise indeed.
The author then uses his introduction to draw us into how his personal story draws parallels with that of his character's, Aaron Burr. His parents were originally from Barbados and he learned to keep journals following the advice of his mother, in order to keep a written record of his travels and experiences. Like Birr, he suffered much grief and loss and continued to fight for his best life.
The book is split into five parts: Audition, Rehearsal, Theatre, Performance and Afterwards. Each section reveals Terera's thoughts on his own performance, his fear of failure, the embracing of new friendships and his absolute and complete respect for the entire ensemble. We are treated to little nuggets of backstage shenanigans, famous visitors, disastrous attempts at coming to terms with a revolving stage and how he struggles to walk backwards up a moving staircase whilst singing his lines. Random thoughts are interspersed throughout and show a leaning toward philosophical thinking.
There are exclusive photos throughout the book and the vibrancy jumps off the page. Discussions on costume are divine and we can almost hear the swish of his tail coat and feel the tightness of his cravat.
I won't pop in chunks of quote here as, out of context, I fear they would be underappreciated.
All-in-all (my usual distaste for musical theatre aside) I was rooting for the cast, all the way to the final page. From their difficult auditions, through the extremely demanding rehearsals, the first run-through, the press shows and pre-shows. All this before opening night had even approached. I have utmost respect for an actor who can come from performing Shakespeare and then find himself thrust into the game-changing theatrical extravaganza that is Hamilton. As we say in Ireland: "Fair Play to Ya"! (Excuse the pun). A fine read which affords life to the players who entertain the world.
Hamilton and Me: An Actor's Journal is published by Nick Hern Books and is available in Hardback and ebook from all good bookshops.
ABOUT THE AUTHOR
Giles Terera MBE is an award-winning actor, musician and writer. 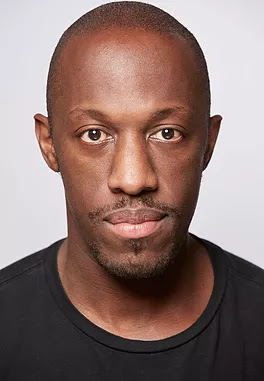 He trained at Mountview Theatre School and has worked consistently at venues such as the National Theatre, the Royal Shakespeare Company and Shakespeare’s Globe. He is best known for originating the role of Aaron Burr in the London production of the award-winning musical Hamilton, for which he won the 2018 Olivier Award for Best Actor in a Musical. 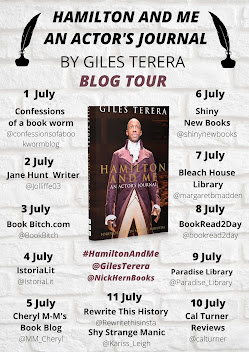 Posted by bleachhouselibrary at 01:33 No comments: